PUBLICATIONS The financial costs of the green transition in developing countries

How interest rates impact the access to affordable and renewable energy

As climate talks continue to progress this week at UN’s COP27 summit in Egypt, it is clear that everyone, developed and developing countries alike, has considerable interest in making sure that energy demand is oriented towards renewable sources. The good news is that according to the International Energy Agency (IEA), investments in renewable energies have reached record levels, accounting for almost three-quarters of the growth in overall energy investment.

For developing countries to be able to follow, this means that renewable electricity production should be cheaper than the fossil fuel alternatives. When one looks at the costs of energy investments, financing (i.e., total expenses due to borrowing) represents the largest source of expenditure. It is higher than capital purchases or marginal costs (operations and maintenance): it could represent between 25 and 50% of the long-term average costs of producing clean energy in emerging markets (ex-China), according to the IEA. The level of interest rate has a direct impact on these investments. As they increase, so does the cost of debt, thus raising even more overall investment costs, and disproportionately so in countries with higher risk spreads. 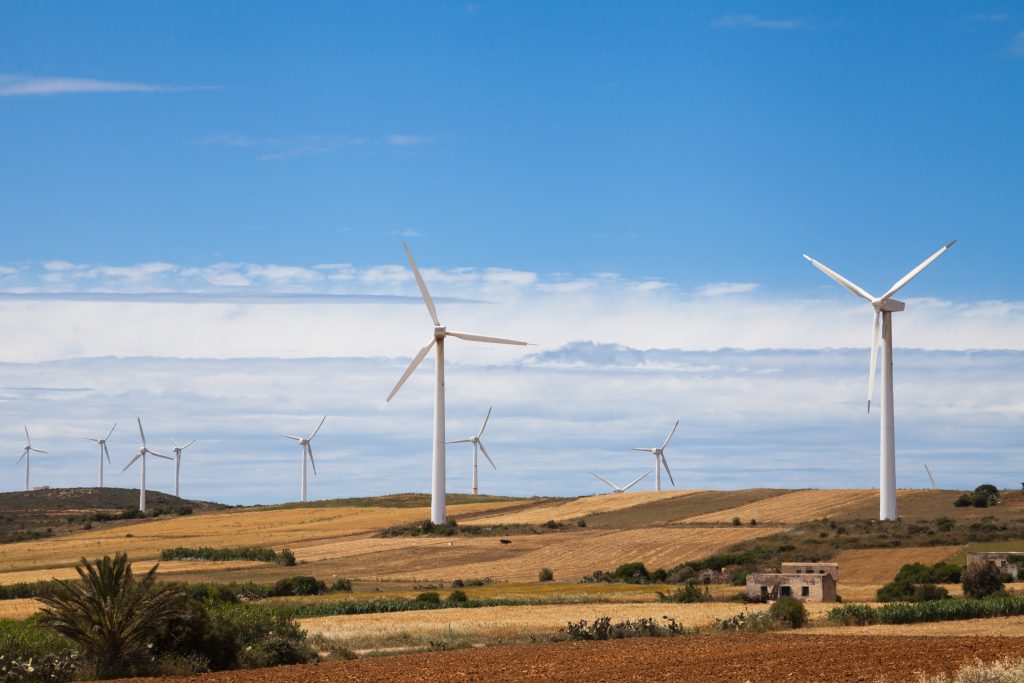 This leads us to two key questions:

1. What would it take to direct the sector’s massive investments over the next 8 years predominantly towards wind and solar?

2. Is the current rise in interest rates, especially in developing countries, a threat to today’s much-needed green transition?

This short note looks at the relative cost-advantage of renewable sources of energy compared to a gas-combined cycle and analyses whether the current rise in interest rates could threaten their cost competitiveness. It is based on average cost estimates formulae for medium size plans determined by Lazard (2022). Solar costs will be lower in sunny places, and wind plants less expensive in windy places, but using averages provide us with useful orders of magnitude that can lead to important policy advice.

1. At medium-levels of interest rate, renewable sources of energy are cost-effective

Start by considering the impact of fuel prices on the choice of technology.  Obviously, producing electricity using gas becomes more competitive at low gas prices. Chart 1 shows that, with interest rates at 10%, solar and wind have very close average costs, which are independent of gas price - at around 4.8-5 cent/kwh. The gas-based technology is cheaper when fuel costs are below $6-7.5/mwh. This means that the recent period of high fossil fuel prices (about $10/mwh during 2018-19 and $15 in 2022) was favourable to green energy.

Source of data: Lazard 2022. These curves are calculated at a 10% interest rate.

Interest rates matter differentially in terms of total cost because the 3 technologies have a different mix of fixed capital investment. Solar and wind are dominated by fixed costs – solar panels and wind turbines are expensive, but the wind and the sun are free, meaning that maintaining those assets is relatively cheap. In contrast, gas-produced electricity uses much cheaper plants at a fixed cost, but this comes at the expense of higher marginal cost from burning fuel all the time. The lower the interest rate, the more attractive clean technologies become relative to fossil fuels. Chart 2 shows a threshold of interest rates below 14%, at which solar-based energy is more competitive than gas.

Energy projects are long-term investments and the above comparisons only work over time. Indeed, current prices are not very informative for the 20 years ahead in terms of cost-forecasts for each technology.

A finance minister of a developing country looking at Chart 2 would be concerned that even at a 14% interest rate, when solar appears to break even with a gas-based plant, the chance that gas prices will decline, compared to their 2010-2018 average levels, still remains strong.

Chart 3: At any level of gas price, solar power is more competitive with sufficiently low IR 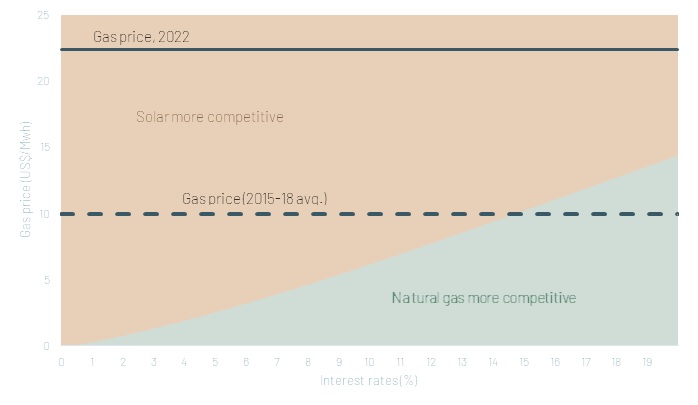 For any given level of gas price, solar is competitive with sufficiently low IR

How can international lenders make this bet safer, considering that we are moving into an era of high interest rates and low access to capital?

This short blogpost may not answer the question entirely but it points to the fact that it would not require much: first-loss guarantees, some level of interest rate subsidy, and refinancing facilities to ensure stable borrowing costs would help make renewables a safe bet.

The real challenge is that it must be done at scale: the IEA forecasts more than $1 trillion private sector investment in the energy sector per year for developing countries and just as much by the public sector. It estimates that lowering costs of capital by 200 basis points would reduce the cumulative financing costs of getting to net zero by $15 trillion through to 2050.