Last week, the IMF published its Staff Report on the Extended Credit Facility for Zambia, marking an important step in the Zambia’s default and restructuring saga. It is certainly a milestone for Zambia, but also for the post-COVID international finance architecture more broadly. Zambia is widely seen as a poster child for the excesses of the post-2010 development finance landscape, its public debt climbing from 20 to 100 percent of GDP between 2010 and 2019, and to 120 percent at the end-2021, primarily backed by Chinese development banks and extensive use of Eurobonds.

Zambia’s case is all the more interesting that it is the first time a country is seeking an IMF bailout conditioned on a debt restructuring within the Common Framework, the initiative endorsed by the G20 and the Paris Club. Ethiopia's case has been slowed by the conflict and Chad's has advanced but Comparability of Treatment is out of reach due to Glencore as a creditor. 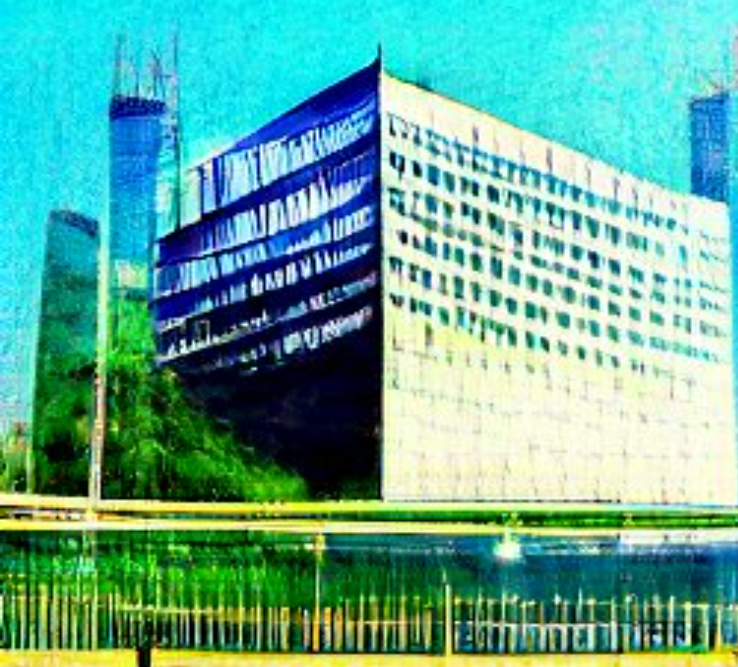 In the past, China’s participation in debt treatments was generally achieved on a bilateral basis, eschewing the collective process with other creditors. This time, it is likely to participate in a collective debt restructuring through the Common Framework. Considering the large amount of Chinese loans to countries with high debt service and high risk of debt distress, it is unlikely to be its last time.

This post is drawing three key lessons from the ECF and the prescribed debt restructuring, on the IMF, the Common Framework, and China as a creditor. Several other authors have had excellent and immediate takes which this post is building on.

1. Not that different with China in the room

As a starting point, one may have expected an ideological opposition to the IMF’s approach to development, with austerity and structural reforms as drivers of the forecasted rebound. Considering the importance of China as a creditor (about 25% of external debt), the process could have gone differently. As Jade Scarfe from Development Reimagined pointed out, the program is far from following the Chinese recipe for growth, i.e. cutting public investments across the board whilst halting new projects. The rise in social protection spending is unlikely to compensate other budget cuts and, in aggregate, could worsen poverty outcomes (Grieve Chelwa). Although economic approaches have changed at Fund, the memories of Structural Adjustment Programs of the 1980s remain strong in Zambia.

The hope is that multipliers will be lower than usual, although there is little evidence to explain why. On the whole, even if  the program was not aligned with a Chinese  development vision, it does not seem that it changed the Fund's scenario.

Another source of concern regarding Chinese participation was the disagreement about how "official" and "commercial" debts should be defined. Under the Debt Service Suspension Initiative (DSSI), China had included in its official lending to be deferred only loans with a concessional elements, and not those lent at commercial terms. As a result, some loans viewed as official by most G20 and Paris Club members, or under OECD definitions are viewed as commercial and private by China. Opacity of loans, often made to SOEs, also complicated a possible participation (see for instance Brautigam (2021) on arrangements over the roads and energy projects).

In the case of Zambia, most loans were held by Eximbank and therefore clearly from the official sector. But China Development Bank and ICBC, considered thus far as commercial, also had a very significant presence. Information is scarce but a comparison between SAIS-CARI data and debt listed in the IMF report seems to indicate that Eximbank will be folded into official bilateral lending and so will all loans insured by Sinosure (Brad Setser). For instance, the $1.5 billion loan for the Kafue Gorge Lower hydro project involving both Eximbank and ICBC, will fall under this umbrella[1]. This should provide some useful insights regarding China’s future approaches to lending abroad, bearing in mind that China has adopted a relatively broad definition of its public sector. In the end, with full Comparability of Treatment, this should be equivalent, at least in theory[2].

Third, the uncertainty is not completely lifted on how Comparability of Treatment will be interpreted. Based on the broad parameters described in the Staff Report and which were agreed upon in negotiations between official creditors and the country, the Official Creditor Committee will define the specific modalities of debt relief in the form of a Memorandum of Understanding[3], implemented by each bilateral creditor independently.

Brad Setser calculated that Chinese loans might not need to take face value haircuts, whilst a mix of maturity extensions and lower coupons could meet IMF criteria. These questions, together with the application of Comparability of Treatment to other creditors, including bondholders, will only be resolved as discussions start. The IMF’s application of Lending Into Official Arrears (LIOA) allows it in this case to disburse, but also means that uncertainty on actual treatment could take more time:  deadlines run until the first review for official lenders (April 2023) and until the second review for private creditors (October 2023).

Finally, an intriguing footnote, which might or might not be related to China tells us that about $2.4 billion of Zambia’s external debt, i.e. 9.5% of its GDP, is collateralized “with some form of security or escrow arrangement”[4]. Of course, Chinese lenders have been frequent users of such arrangements (though they are relatively common by non-Chinese commercial lenders). The collateral does not seem to have protected creditors: the balance on all those loans is zero and they will likely be part of the restructuring process. This could be good news, and illustrate that those contracts, often opaque, are less dangerous.

2. How safe are foreign investments in local currency debt?

The IMF sought a comprehensive definition of the debt perimeter to be restructured: as noted by Brad Setser, it includes not only government debt, but also that of State-Owned Enterprises, even when not explicitly guaranteed, as well as contractors to SOEs and a large array of arrears. However, it excluded a large and expensive source of debt domestic currency debt held by non-residents. Theo Maret made this point: while included in the DSA perimeter, it will not be part of the restructuring. The IMF makes a compelling point that restructuring domestic debt would be catastrophic for local banks. But why not burn international investors?

First, practical reasons make that difficult.  Treating debt held by domestic residents might not be desirable, and separating foreign from domestic investors is difficult for practical and legal reasons. Holdings are hard to track and it might not always be possible to identify bonds held by foreign creditors. There are strategies to separate foreign from domestic bondholders (In a 2004 paper, Brad Setser and Anna Gelpern provided some key examples), but they come with hurdles.

But perhaps more importantly, it might not be desirable, from an economics and incentives point of view. Notice that most of these investments have poured in very recently: foreign holdings of governments bonds have tripled in the summer 2021, from $800 to about $3.2 billion. 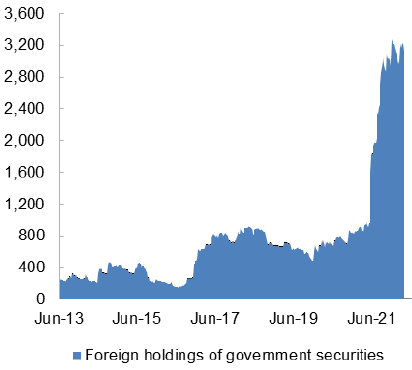 Indeed, as President Hichilema was elected, with a clear program to seek an IMF bailout, foreign sentiment turned in favour of Zambia, and the Kwacha appreciated. This was probably a good bet for investors, with interest rates close to 25% and strong currency appreciation. This wager was also one on the absence of domestic debt restructuring. So should the IMF have pushed to include it in the debt treatment? And what does it mean for other countries, like Ghana, with large foreign participation in domestic-currency bonds? Will they be spared from haircuts?

Probably not. With protracted debt restructuring debt negotiations, large deficits were necessary to avoid an economic collapse, and they had to be financed through domestic issuance. Restructuring on debt issued while negotiations were under way would send a perverse signal to investors to stay off. As a result, it would kill any of the remaining appetite for the Common Framework. For a country like Ghana, where foreign investors entered well before stress materialized, the situation is therefore quite different.

It also implies that while Zambia was protected from a major recession while in default, it accepted some clear costs. Banks hold large amounts of public debt and unless real growth is very strong, reducing the value of this debt through inflation might be necessary.

3. How large can the losses be for bondholders?

Can the Common Framework deliver large cuts to external debt? In terms of present value, debt treatment is actually close to historical averages. The present value of Public and Publicly Guaranteed (PPG) external debt was estimated at about 70% of GDP pre-restructuring[5], and the IMF scenario centres around an objective to reduce it to about 45% of GDP, which would be 35% in present-value reduction[6]. However, once local-currency debt is removed, the NPV haircut is quite higher: from 57% to 32% of GDP, a 44% of reduction of its value. For bonds this would mean that prices should fall to 56 on the dollar. Incidentally, this is close to the current trading price of Zambian government bonds (between 56 and 59[7]).

Retrospective studies of default estimate the average level of haircuts to be around 40% between 1970 and 2010 (Cruces and Trebesch 2013)[8]. Present value calculations depend on the discount rate that is use. Indeed, it can differ from the IMF-standard rate and change actual calculations, including Comparability-of-Treatment estimates[9]. But at first blush, the proposed treatment is only slightly above historical averages.

Debt service relief is more straightforward: under the IMF-proposed scenario, it would fall from $13.4 billion pre-restructuring in the program period (2022-2026) to about $5 billion after restructuring, i.e. a 63% cut. The IMF then suggests “additional cash relief in 2026-2031”, but likely in smaller relative amounts. In other words, the restructuring is mostly front-loaded, with growing uncertainty after 2031 (Tim Jones).

As a result of these two dynamics, protection for local-currency bondholders and slightly above-average treatment of dollar-denominated debt, total public debt will remain high in the scenarios drawn by the IMF: from 133% of GDP in 2021, it would fall to 65% by 2027. This implies that the fiscal stance is likely to remain tight well beyond the program, or that further restructuring might be needed.

To conclude, Zambia’s case offers an important first example of a treatment under the Common Framework. The outcome was long, costly, and in the end relatively conservative as less than half of external debt’s value is treated, and adjustment is likely to be painful. High copper prices would allow Zambia to make it through, but other sources of growth will be limited.

I am grateful to Ishac Diwan (FDL) and Ignatius Masilokwa (Zambia Institute for Policy Analysis and Research, ZIPAR) for their comments.

[1] See Deborah Brautigam’s fascinating paper on Chinese misguided loans in infrastructure, which also explains part of the inefficiency in the public investment surge.

[2] In the case of the CF, there are even incentives to consider creditors as official rather than private, as the hurdles to lend into arrears are higher for official than for private creditors. In other words, if an agreement was reached with official creditors, Zambia’s bargaining position would be relatively strong against its private creditors.

[3] The conditions do leave some leeway on actual implementation:  “MoU will include the following key parameters; “at least (i) the changes in nominal debt service over the IMF program period; (ii) where applicable, the debt reduction in net present value terms; and (iii) the extension of the duration of the treated claims.”

[5] From the Debt Sustainability Analysis (DSA), p.21. Compared to an external debt-to-GDP ratio of 78%, this underlines how the bulk of Zambian debt was non-concessional, surprisingly for this level of income.

[6] From the “illustrative restructuring scenario”, p. 20.

[8] The IMF uses the standard 5% discount rate, which is different from those in standard studies.

[9] Which will be essential in determining how comparable the treatment of different creditor groups will be, see e.g. World Bank (2022) and Lazard (2022)