WTO Director General Ngozi Okonjo-Iweala and Nobel prize-winning economist Esther Duflo discussed the challenges to multilateralism and growth in the 21st century, in a conversation moderated by Daniel Cohen, the chair of the Finance for Development Lab.

Ngozi Okonjo-Iweala opened the discussions by highlighting that mistrust in globalisation and multilateralism was exacerbated by the COVID-19 pandemic. She used the COVAX programme as an example of such mistrust: an important initiative which ended up with rich countries buying vaccines that were destined to the poorest.

She added that multilateral organisations are based on a system that crucially needs revamping, in order to efficiently tackle 21st century issues. In the case of climate change, the need for change is even more pressing, as impactful measures such as a global carbon price are long overdue. 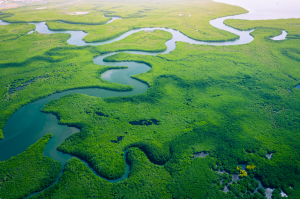 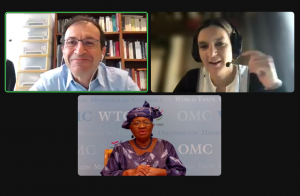 “The multilateral system we created 70 years ago is a global public good and we must invest in it.”

“We’d better start working on climate today because when an actual crisis occurs, it will be too late and rich countries will just fight for themselves.” Esther Duflo

Esther Duflo highlighted the interdependence between poor and rich countries when faced with a global crisis such as the COVID-19 pandemic. Commenting on global politics, Duflo regretted a “short-sighted vision of individual leaders” resulting in a lack of discipline and concrete action, which cost the world an opportunity to eradicate the virus. As she rightfully pointed out, crises are never the right moment to develop solutions.

Okonjo-Iweala concluded with remarks on global trade, stressing that the pandemic revealed a need to deconcentrate manufacturing and that a new form of globalisation should be shaped by putting the emphasis on labour force mobility. In the case of climate change, the need for change is even more pressing: impactful measures such as a global carbon price are long overdue.

Talking about the hope for economic development in the aftermath of COVID-19, Duflo also highlighted the great potential and competitive advantage of the African continent.

“There is a dream of industrialising Africa. We always talk about free flow of goods and capital but the free flow of labour is the problem. Economists never talk about that.  [We need to] overcome fears of cultural issues, of race, of all these barriers.”

“We are likely to see new globalisation, less concentration in the global value chain. This could be a great window of opportunity for countries that have been excluded from global trade so far, especially by China.”

“There are sectors that were impossible to penetrate before and have now become options. [African countries] can leapfrog and go straight to parts of international trade that are less cornered by China.”

The first panel introduced the African Liquidity and Stability Mechanism (ALSM), a new regional financial arrangement for Africa and the first policy recommendation crafted by the Finance for Development Lab, in collaboration with our partner, Cairo-based Economic Research Forum (ERF).  Brendan Harnoys-Vannier, Economist at FDL, presented the key features of the mechanism, followed by a discussion with members of the Steering Committee of FDL. 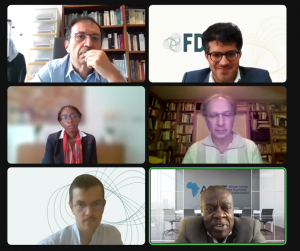 The first speaker in the panel, UNECA’s Executive Secretary Vera Songwe, underlined the need for new financial institutions to answer Africa’s liquidity and stability issues. She pointed at a global liquidity mismatch, with excess in the West and not enough in the rest of the word. African bonds cannot be used as collateral to access liquidity, a regular feature of market infrastructure in other regions. This is penalising for African countries and a factor of illiquidity, she said. This implies that high liquidity premiums are hindering financing for bankable projects. Increasing local currency financing would help reduce the impact of external shocks, such as those linked to US inflation or the war in Ukraine. The regional financial architecture needs to be more sophisticated.

“What we are trying to do is create that market infrastructure to have a level playing field. It is about using market mechanisms to level the playing field and to get African countries with strong and stable macroeconomic fundamentals into a system where they can have access to more liquidity.”

“There are lessons from East Asia which has put in place one of these regional liquidity mechanisms but it has never been used. The lesson is that when you have these in place, you get the benefit even if you don’t use them.”

Edward Brown from ACET in Ghana talked about Africa’s lack of resilience, explaining that the continent never had an economic transformation, thus making recovery from economic crises even more difficult. For instance, the transformation index developed by ACET went into steep decline since 2013, a concerning trend. The lack of transformation is not due only to a lack of liquidity: African governments need to better address the gaps in economic transformation and governance.  Those two elements will be essential for economic growth.

Brookings’ Homi Kharas pointed at an “issue of differential treatment of countries because of differential access to liquidity”. Because of the COVID-19 crisis, debt levels are excessively high, thus discouraging governments to make fiscal stimuli.

He asked to put an end to a dominant narrative about African governments being the source of the problem. Stressing that more trust needs to be built, he said that financial institutions could play an intermediary role, quoting the example of east Asia. His conclusion was that African countries could benefit from the existence of an ALSM even if it is not used and that a monitoring mechanism should be also implemented for spillover issues.

“In economics, it doesn’t matter what the debt value is. It is the debt overhang problem we need to resolve today. We call it the problem of fiscal space.”

Panel 2: The role of China in development finance

Introducing the panel, FDL’s Research Director Ishac Diwan, commented on China’s evolution to becoming a major global financier, particularly in Africa, as well as a major trade partner, within the framework of its “Belt and Road” initiative.

“The amount of China’s financing is estimated at around 1 trillion dollars. China’s loan portfolio has increased rapidly over the 20 past years, especially for LICs: 100 billion dollars, which makes up 25% of the loans received by these countries – nearly equal to the amount of the debts to the World Bank.” Ishac Diwan 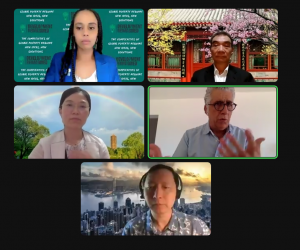 The objective of this panel was to answer the following question: is the involvement of China in providing loans to developing countries marked by a cooperation between two blocks, or by a competition between them?

China is eager to share its development lessons and experiences, as highlighted by Justin Lin (INSE, Peking University). In particular, investments in infrastructure were both at the heart of China’s own development and its cooperation with other countries.

Indeed, Lin stressed that the competition in the domestic and the international market is conditioned by transaction costs, of which (the lack of) infrastructure is a major component. Although the Chinese government did not provide direct financial support to the labour-intensive industry, it focused on the financing of its infrastructure to reduce the transaction cost. As a result, firms operating in labour-intensive industries made profits which they could reinvest in industrial upgrading.

“If a country wants to get rich, it should invest in infrastructure”

Hannah Ryder (Development Reimagined) also emphasised Africa’s crucial need for more and better infrastructure, stressing that in work done by Development Reimagined, the needs for infrastructure investment to meet the SDGs for just four countries (Ghana, Nigeria, Côte d’Ivoire, Senegal) were estimated at around 75 billion US$, or 15% of their GDP. China's lending of $150 billion to African countries over the last 20 years, mostly on concessional terms, has been important, but we need more, both from China and G7 countries.

Ryder said that China could reallocate some of its SDRs to African countries or other local instruments, instead of focusing on external ones such as the IMF. SDRs could be channelled through the AfDB for example, UNECA’s LSF or new mechanisms like the ALSM. Ultimately, development should be seen from an African perspective.

“In Chinese lending, it is the national local law of recipients that is the real benchmark not the donor or the creditor who imposes the standards. It is up to the [recipient] government to say this is what our requirements are.”

Shang-Jin Wei of Columbia University stressed that the nature of development finance has changed, with China becoming an important receiver of debt service, up to the same level as MDBs and Private Finance and higher than the Paris Club. The developing world is now facing three global shocks: COVID-19, the rise in US interest rates, which might lead to a wave of foreign currency and banking crisis, and the War in Ukraine which is impacting the energy and food importers.

Debt should be discussed in the broader context of capital flows. Capital flows in Africa are too concentrated on debt. FDI or equity are less risky, meaning that a transition should be made from debt to these types of inflows. Other types of debt than the usual foreign currency-denominated loans have better risk-sharing properties:  local currency loans and the use of innovative instruments such as commodity-linked bonds. Wei added that China prefers debt rescheduling rather than debt forgiveness even though the two can be seen as equivalent. Other developing countries can also learn from China's own experience with foreign capital flows. During its development process, it initially actively avoided foreign currency debt as much as possible.

Jiajun Xu (INSE, Peking University) echoed these views adding that developing countries need long-term investments with a transformative potential. After the Great Financial Crisis, emerging markets obtained responses to their calls for more flexibility and reforms in the international financial institutions. She stressed that China can play an innovative role, including by being a pillar in coordination between advanced and developing economies to avoid a debt crisis. She concluded saying that debt needs to promote the structural changes of a country in order to increase the countries’ capacity in the future while making debt sustainable in the long run.

In a conversation with FDL's cofounder Hamouda Chekir, Mexico’s former Minister of Finance, Jose Antonio Gonzales Anaya, introduced a new group of former Finance Ministers brought together to discuss the impact of COVID-19 and improve the dialogue between health and finance ministries. The group will reflect on the principles of a new international financial infrastructure, based on a rigorous academic work and experience in the political realities. The most worrying factor will be the consequences of rising rates by the US Federal Reserve. With rising costs of financing and spreads, vulnerabilities will emerge. This is a "new normal", to which governments and financial markets will need to adapt.

“The power of the Fed in emerging markets is huge and every time we underestimate it”.