In this first working paper, we examine the external debt dynamics of 113 developing countries.

We use World Bank data on debt dynamics and debt service, along with projections from the IMF, and build a simple model of debt dynamics, with assumptions on growth and fiscal deficits from the IMF. We use two scenarios on financing conditions to forecast how financing needs will enter in the future.

The result is a concerning image of developing countries' external debt: under current financial conditions, up to 35 countries would be above high risks thresholds.

Those thresholds are admittedly arbitrary, but they matter in the case of debt restructuring, and at times to set debt limit policies on non-concessional borrowing.

The model will be updated as new data is integrated, and will soon also be released for external users.

It provides a comprehensive, world-level picture of external debt. At the same time, by its generality, it misses the numerous particularities of each country. In future iterations, it will include more details for each, more possible scenarios, and eventually an interactive tool for users to input their own implementation. 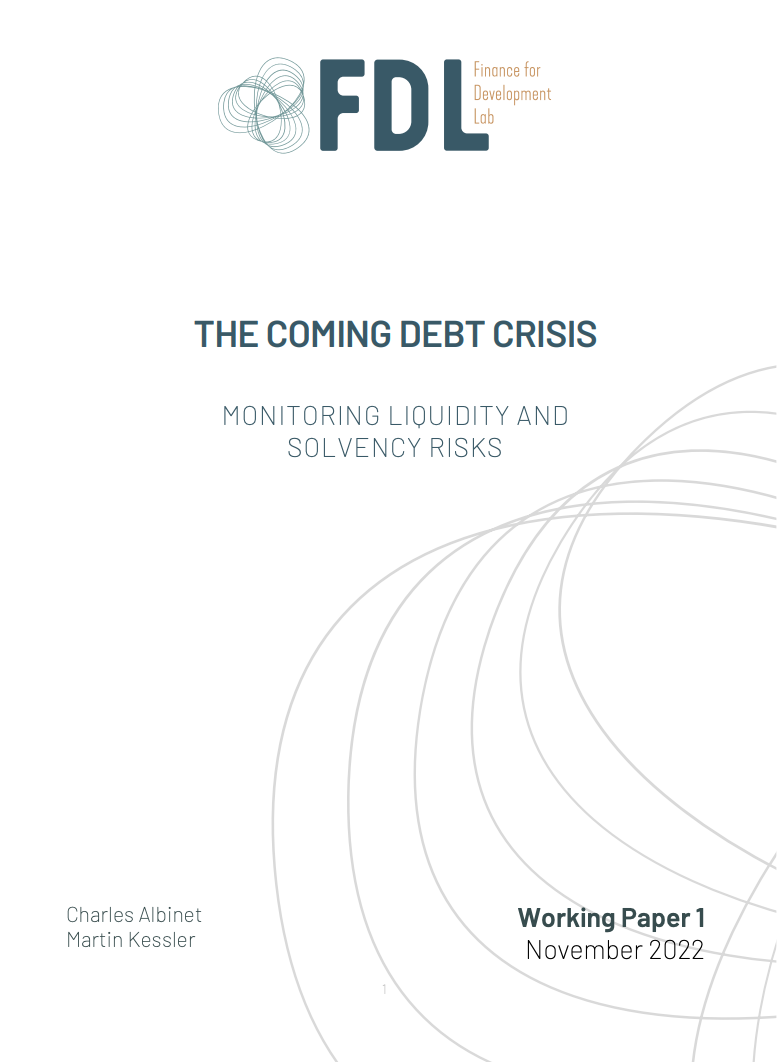 External public debt risks in developing countries are on the rise and have been for several years. Higher debt stocks, debt service and assessed risks by international institutions have led to intensified calls to strengthen debt restructuring initiatives. This project’s ambition, of which this paper is the first of a series, is to provide a global snapshot of the debt situation in developing countries. It does so by applying a simple Debt Sustainability Analysis to 113 Low- and Middle-Income Countries. The model will be updated when new data is released, and the full dataset made public in early 2023. It will be progressively enriched, integrating more metrics, more scenarios and feedback loops. We also look forward to receiving advice from readers on next steps.

The main findings from the current version show that while debt stocks remain relatively low, current costs of funding make debt service hard to sustain, with an expected peak in 2024-25. We find that under a conservative scenario, where financial conditions return to their 2015-19 average with lower interest rates and a stable exchange rate, those tensions would be manageable for most (the median country would pay 10% of its government revenues in external debt service, against 8% in 2019). However, a significant minority of countries (about 28) reach 18% in 2025, which is about the combined health and education budgets for the average country. The number of countries crossing risk thresholds also rises moderately, peaking at 28 in 2024, from 22 in 2020.

Debt service to revenues distribution and median by income group 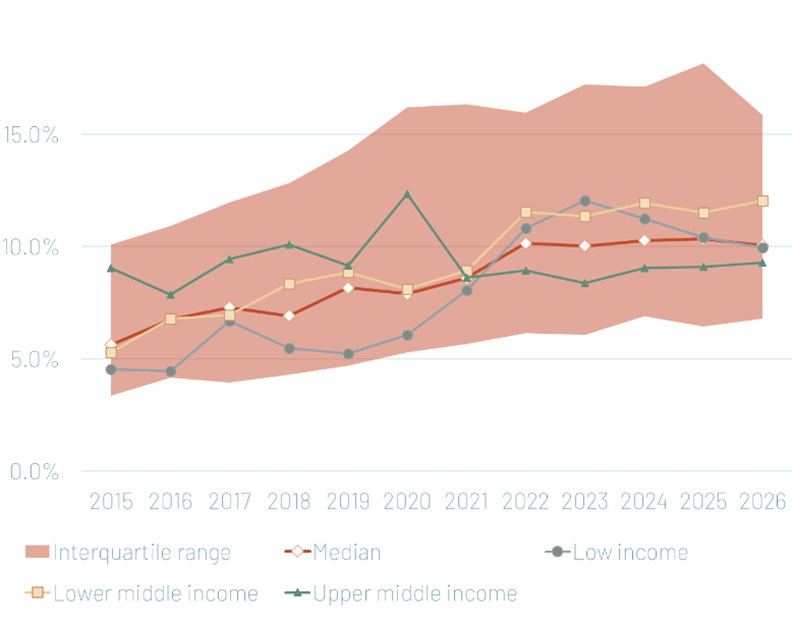 However, when accounting for higher real interest rates and the appreciation of the US dollar, debt service rapidly rises to levels that would require high external financing flows. 35 countries would cross debt service risk thresholds (against 22 currently), and would double in Sub-Saharan Africa, from 10 to 18. Lower Middle-Income Countries are especially vulnerable: their median debt service to revenues rises to 15% from 10% in 2020. Their exposure to commercial debt markets makes them especially vulnerable to the ongoing funding shock. 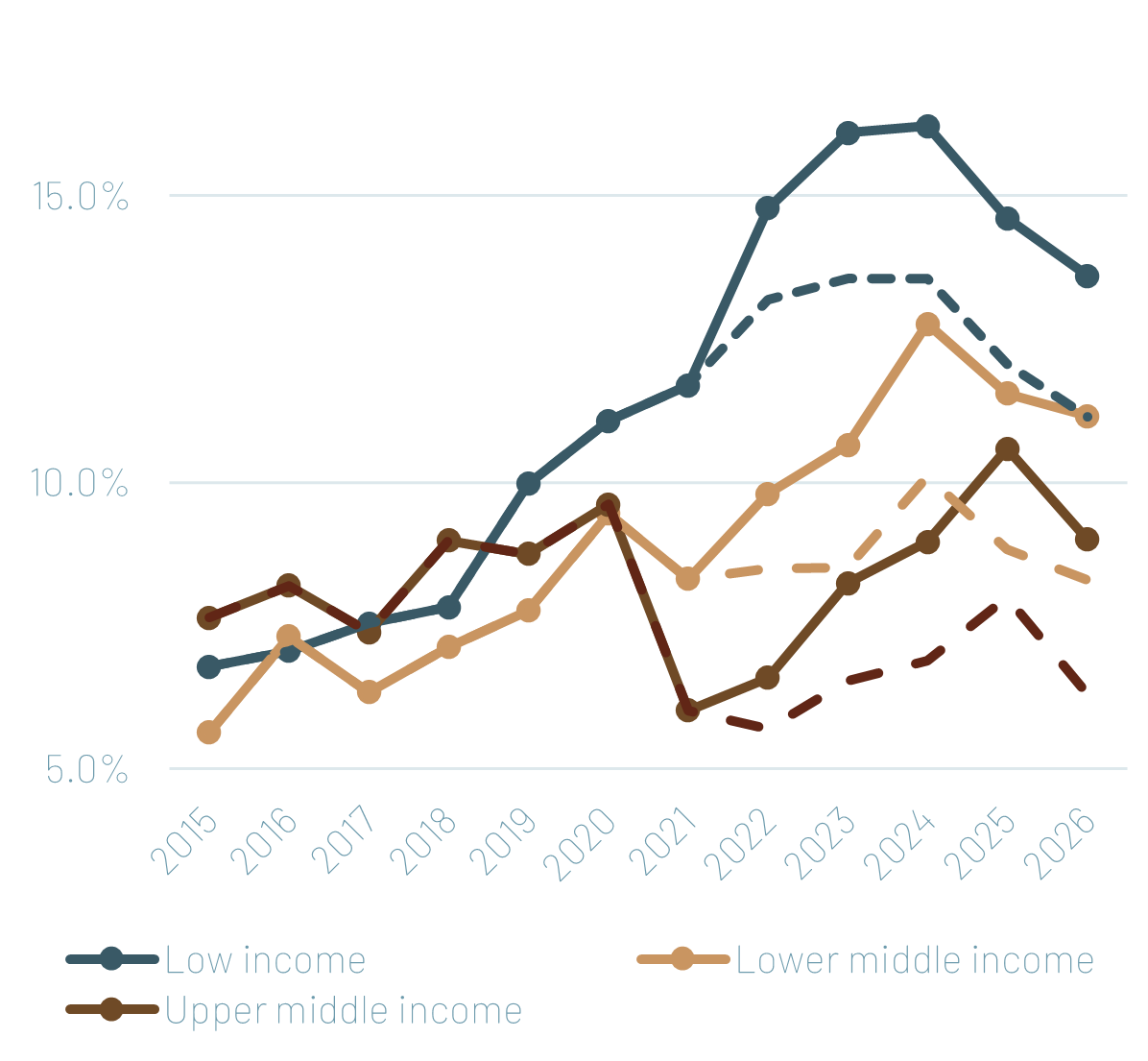 Projected breaches of the DSF debt service to revenues threshold 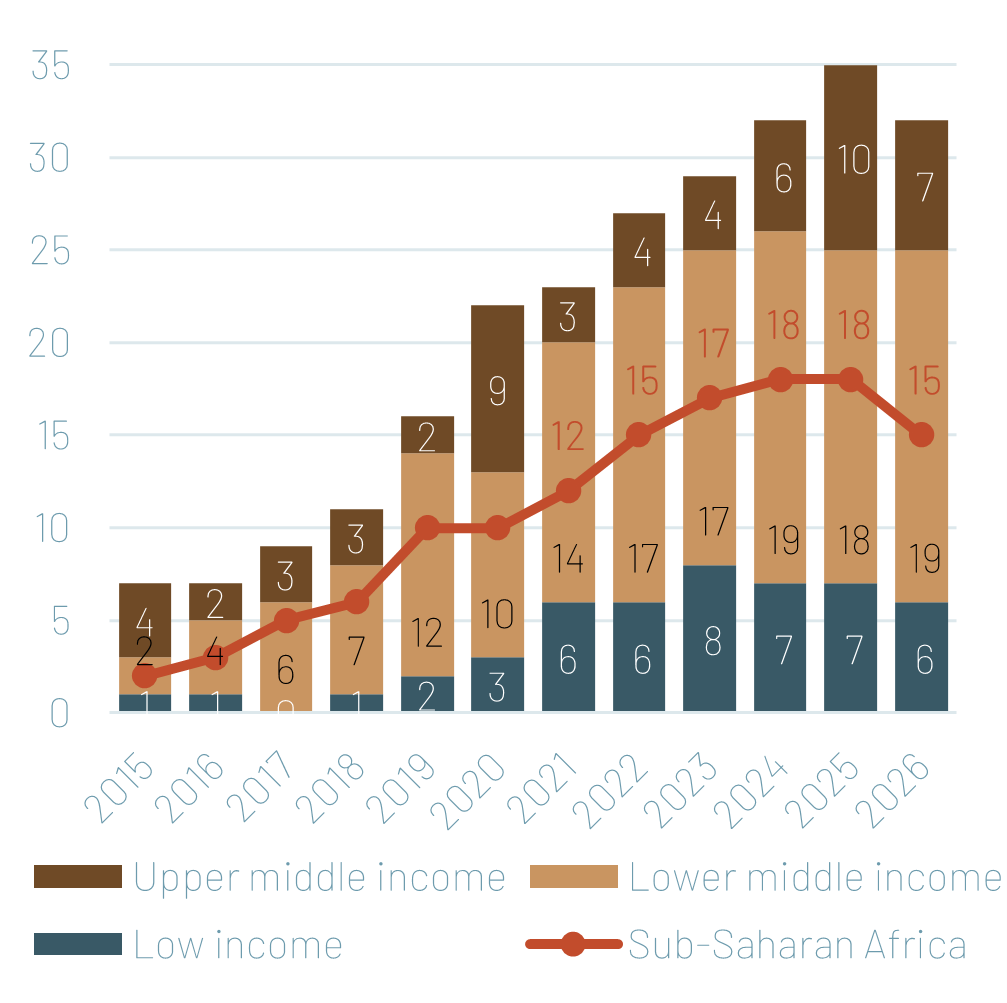 Countries with high and growing external debt stock problems tend to be small upper middle- income economies. For most countries, under current assumptions of growth and control of fiscal deficits, debt stocks tend to decline from their 2020 levels. 23 countries breach external debt stock risk thresholds as defined for the IMF, but mostly in 2022-23, with an expected decline. Countries with debt stocks above thresholds tend to be upper middle income economies, with higher prevalence of small islands than in the case of countries with debt service breaches.

Can developing economies sustain this prospective fast rise in debt service and associated financing needs? Bond issuances have largely played this role in the 2010s. However, in 2022, a large number of previous issuers have not been able to return on markets. How could emerging and developing countries replace this large source of finance for their economies? In 2022-26, we estimate that financing needs could represent USD2.5 trillion across all emerging and developing countries, including USD300 billion for countries eligible to the IMF Poverty Reduction and Growth Trust (PRGT), and USD340 billion for Sub-Saharan countries. Those are large sums, which could trigger major debt crises. It is therefore essential to reduce the cost of debt and enhance the resilience to shocks.

The main goal of this paper is to present the model and establish key findings, which are hinting at policy challenges – to be discussed in future publications. The range of policy options available for developing countries remains limited, and include: fiscal consolidation, increased reliance on domestic, enhanced access to concessional financing (including grants), and debt restructuring. Each have their benefits and costs, which we discuss in the conclusion. However, more remains to be done, notably at the global level, and this would be precisely discussed in upcoming publications.

DEALING WITH THE NEW WAVE OF DEBT OVERHANGS